The Challenge: attempt to purchase no single-use plastic for the whole month of July

So it’s been a while since I wrote a post, but I decided to take on a challenge this month and it’s something that I just have to share. It’s called Plastic Free July.

Plastic Free July was started as a local community initiative by the Western Metropolitan Regional Council in Perth, Australia in 2011. Its popularity grew in 2012, so in 2013 PFJ expanded to include a website for the project and over 3,000 people around the world have already signed up.

So what’s the idea?

The challenge is simple: attempt to buy no single-use plastic for a month. ‘Single-use’ includes plastic shopping bags, plastic cups, straws, plastic packaging…basically anything that’s intended only to be used once and then sent to landfill. It’s not a competition, so you can keep a ‘dilemma bag’ for any unavoidable plastic that you purchase. There are lots of ways to share your stories and pics, ask for advice, or have a go at recipes and DIY’s for around the house that don’t use plastic. You can do it for a day, a week, or the whole month. You can also choose just to cut out the ‘Top Four’: straws, plastic bags, plastic bottles and coffee cup lids.

Basically, it’s a way to raise awareness about the amount of plastic that you use. That everybody uses. That could be avoidable.

Australians send 1 million tonnes of plastic waste to landfill every year. Every piece of plastic ever produced still remains somewhere in the earth today. Why use something for only a few seconds that will take longer than the rest of your life to break down?

Most of the commonly used disposable plastic items are a convenience and the numbers are staggering. In one week we go through 10 billion plastic bags worldwide, in the USA an average of 2.5 million plastic bottles are used every hour whilst over 500 million straws are used daily!

There’s also the problem of recycling: whilst important, recycling will never be the solution to rapidly expanding consumption. Plastic Free July focuses on refusing, reducing and reusing. Plus it’s not always possible to recycle everywhere you go.

Some people are also becoming concerned about the health impacts of wrapping food in plastic. The UN and the WHO have even released some reports about it.

Plus of course an issue close to my heart: marine debris. More than 270 of the world’s marine animal species are affected by marine debris; it has a major impact including entanglement and ingestion. CSIRO estimates that there are more than 115 million bits of rubbish on Australia’s coastline. This averages about 5.2 pieces for every person in the country! 74% of all waste we find is plastic. 50% of the top items of ocean debris are associated with beverages. But by using your own drink bottle, takeaway cup and reusable straw (or refusing one) we can all become involved in the solution to reduce plastic consumption and waste.

How to Get Involved

You can register for Plastic Free July here. The website is really informative with lots more information and links to the issue, tips, recipes, tools, and even events in your area. Also, check them out on facebook and twitter. Why not take up the challenge, and see how your planetary footprint can be reduced.

Good luck! And thanks for caring 😀

As the year comes to a close, I would like to wish all my readers a very happy holiday!

2012 has seen some amazing ups and downs in the conservation world, from the creation of the world’s largest network of marine parks, to the ban of live shark finning in Costa Rica and the EU, to the rejection of the supertrawler F.V. Margiris from Australian fisheries, to disappointing environmental commitments at Rio20 and the 15y anniversary of the Kyoto Treaty.

As always, there were great stories of success, sustainability, innovation and inspirational conservation from around the world. And as always, there is still much, much more to do…

But for now I just want to say, thanks for joining me in my first year of blogging. If you haven’t purchased all your eco-Christmas gifts, there is still time! I’d recommend heading over to TreeHugger’s blog for some good ideas if you’re stuck. This time of year always makes me feel generous, and there are many charitable organisations out there looking for some donations as well. Or you could go the whole hog (literally or not), and help out someone less fortunate than you, if you can.

So go on, be excellent to each other.

Have a great holiday season and best wishes for whatever the new year brings.

P.S. If the world does end tomorrow, this still applies… 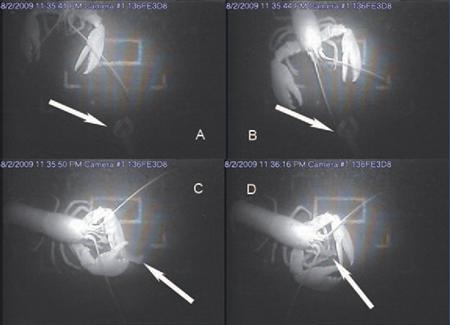 An adult lobster eats a tethered juvenile lobster (as indicated by the arrows) in these handout pictures taken from an infrared camera on the ocean floor near Maine. Graduate student Noah Oppenheim, has been documenting the phenomenon using a special infrared camera that allows him to observe a juvenile lobster tethered with a rope to a spot on the ocean floor. During the daytime, it is fish that typically feed on the tethered juvenile lobsters, but at night the researchers were stunned to see that most of the attacks on the small lobsters were by their larger brethren. REUTERS/Gregory Oppenheim/Handout

Off the coast of the USA, big lobsters have started eating their little brethren in a move never before recorded in the wild.

This is a fascinating case study of population change in the face of climate change and overfishing. And this time it’s about a population that is not only surviving – it’s changing behaviour too.

Warming waters in the Gulf of Maine and decreased predators due to overfishing have led to a huge population increase in recent years. A record 104 million pounds (45 million kilograms) were caught in 2011, compared with 23 million pounds in 1981. 2012 is expected to be even higher.

Lobsters are no stranger to aggressive interaction: they will attack each other when confined in a small space. But now encounters with each other in the Gulf of Maine are becoming so frequent that a predator-prey interaction has come about.

In a study by researchers from the University of Maine, they found that fish were the main lobster predator during the day. But the populations of cod, halibut and other groundfish that feed on lobsters has declined due to overfishing, and in a surprising find, 90% of predation on juvenile lobsters at night was due to older, bigger lobsters feeding on their younger brethren.

The Maine researchers believe this is the first time such behaviour has been visually documented in the wild, although Canadian researchers have also recently found evidence of cannabilism by examining lobster stomach content.

In an interesting contrast, warming waters have led to more disease and lower populations in Long Island Sound and southern New England. The increased abundance (and thus lower cost) of Maine lobster has also led to tensions with Canadian fishermen.

To read the original article from Reuters, click here.